I have a new Babet & Prosper bundle coming out soon, hopefully later this week. Three of the stories are online. I’ll take them off to join with the new lunch-hour read for this collection. I try for four stories in each bundle. The new one, Voodoo and Panthers, is the twelfth Babet and Prosper in the series. For me, the longer the series goes, the more things I need to think about for each story.

The good thing about a series is that I’m returning to a setting and characters that I already know, that I’ve grown fond of. When I write about them, it feels like going home. I have a mountain of notes for Babet and Prosper because I’ve peopled River City with more and more characters, and I need to remember them all. I’d like readers to remember them, too, so I try not to leave too big of a gap between their appearances. I try to bring Lillian and her “girls” into enough stories that they’re not lost in the sea of Vittorio and his vampires and Nadine and her voodoo. I try to focus on the relationship between Babet and Prosper in each story, too. They’re the husband/wife team that flavors the entire series. And I don’t want the witches to get lost in the shuffle. With each new piece I write, there are more things to juggle or balance. And Hatchet has to appear in every single piece, because he’s Prosper’s partner on the supernatural detective squad and because he’s just too cool to be neglected.

As much as I want readers to immerse themselves in the familiar people and places, I also want the stories to feel fresh and unique. I don’t want to start each one with Babet and Prosper enjoying one another, as much fun as that is. The stories are urban fantasy, so there’s always going to be a battle or two, but I try to change them up, add a new element here and there.

In Voodoo and Panthers, I spend more time with Prosper’s pack of shifters. It’s under attack. The pack’s alpha has to turn to Babet and Prosper for help. A while ago, a reader commented that she’d like a romance for Evangeline, so I added that, too. All in all, I’m happy with the mix of plot and characters in this story. And that’s the trick with a series–keeping enough of the familiar–the things that give the stories the right feel–and mixing in enough new things to keep it fresh.

In the first Babet and Prosper collection I did, Babet got top billing. In the new one, to be fair, Prosper gets to be on top. (I’m talking images here, so keep it clean:)

Here’s the cover that will be inside the bundle for Voodoo and Panthers: 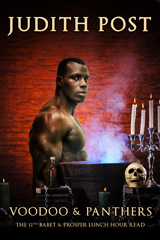 2 thoughts on “Writing a Series”

It's All about the Romance 💕💕💕

Suspense, Passion...Fiction That Flutters The Heart

Beautiful photos of hiking and other outdoor adventures.

From the Pen of Mae Clair

Mystery and Suspense, Flavored with Folklore