I’m so lucky, because I get to share in the joy of Mae Clair’s book cover reveal.  END OF DAY is the second book in her Hode’s Hill series.  I read the first book, CUSP OF NIGHT, and loved it.  The blurb for this one sounds even eerier.  Here’s the cover:

Awesome, isn’t it?  And here’s the blurb:

BLURB:
The past is never truly buried…

Generations of Jillian Cley’s family have been tasked with a strange duty—tending the burial plot of Gabriel Vane, whose body was the first to be interred in the Hode’s Hill cemetery. Jillian faithfully continues the long-standing tradition—until one October night, Vane’s body is stolen from its resting place. Is it a Halloween prank? Or something more sinister?

As the descendants of those buried in the church yard begin to experience bizarre “accidents,” Jillian tries to uncover the cause. Deeply empathic, she does not make friends easily, or lightly. But to fend off the terror taking over her town, she must join forces with artist Dante DeLuca, whose sensitivity to the spirit world has been both a blessing and a curse. The two soon realize Jillian’s murky family history is entwined in a tragic legacy tracing back to the founding of Hode’s Hill. In order to set matters right, an ancient wrong must be avenged…or Jillian, Dante, and everyone in town will forever be at the mercy of a vengeful spirit.

End of Day can be read as a stand alone novel or as a follow-up to book one of the Hode’s Hill series, Cusp of Night.

End of Day is available for pre-order through this link
and available to add to your Goodreads to-be-read list here.

Connect with Mae Clair at BOOKBUB and the following haunts:

If you belong to Goodreads, my publisher–Kensington–is offering The Body in the Attic in a giveaway from Aug. 30-Sept. 13 and will give away 100 FREE e-copies to winners.  You can sign up here: https://www.goodreads.com/giveaway/show/283871-the-body-in-the-attic

I’ve belonged to Goodreads for a long time.  I’ve even worked with the wonderful Tana from Making Connections and given away 10 free copies of my self-published urban fantasies before.  But I’ve never given away 100 copies.  And Kensington has never promoted my books this way before.  It’s a first for me, and I love it!  So, if you’re a member, and you like mysteries, I hope you give it a shot.  And good luck!

Okay, I just read a blog post by James Scott Bell, and he explained very well what I’ve always felt, but in a vague–somewhat nonverbal–way.  And he made it SO clear.  Every book has to have tension, or no one would turn the pages.  It’s easy to point to the tension in a thriller or suspense novel.  The bad guy might kill someone or lots of someones if the hero doesn’t stop him.  Same for horror, only who knows who or what the villain might be.  In a mystery, a hero is trying to solve a crime and restore justice.  But what’s the tension in a romance?  Or a literary novel?

Bell says that conflict is best if there are “death stakes” for the protagonist/s.  But he divides death stakes into physical death, professional death, or psychological.  That makes so much sense!  In a romance, every time the hero and heroine can’t work things out, it builds tension.  If they can’t get together at the end of the book, they suffer psychological death–the death of happiness:  http://writershelpingwriters.net/2017/03/conflict-and-suspense-belong-in-every-kind-of-novel/?utm_content=buffer7ce91&utm_medium=social&utm_source=twitter.com&utm_campaign=buffer

Conflict drives a story, moves it forward.   And the stakes have to keep getting higher every time the reader turns a page.  That’s why there’s the old adage:  Things can always get worse.  They have to, or your story stalls.  During the set up, the author says what the protagonist wants, and he spends the rest of the book making sure he has to work harder and harder to get it.  Here’s a good link by Samantha Stone to build conflict:  http://www.creativewritingsoftware101.com/articles/how-to-create-conflict-in-your-story.php

I used different types of tension in my romances than I’ll need for my cozy mystery, but I still want a romance subplot, and I want to work hard at developing characters readers will care about.  I enjoyed writing Babet and Prosper so much for urban fantasy that I’d like to do something similar for my River Bluffs novels.  I want my characters and setting to be as fully formed as the mystery.  We’ll see how that goes:)

At my writers’ group last week, one of our members tried to decide what each of us needed to do to write a bestseller.  I give him credit.  He believes in all of us, bless him.  And I think we’re all good writers, too, but I have less faith in finding the “secret” that makes a book sell.  Lots of advice says that you need to write a “big” book.  The higher the stakes, the more readers you’ll attract.  That might be true.  I don’t know.  I think the heavens have to align and there’s a lot of luck involved.  And I found this article that sort of agrees with me.  http://www.huffingtonpost.com/peter-winkler/how-to-write-a-bestseller-formula_b_1542587.html

In the meantime, happy writing!

My webpage:  (a free snippet from SPICING THINGS UP–our March 21–and a free short mystery):  http://www.judithpostswritingmusings.com/

Just to let you know, I posted a second, quick mystery on my webpage.  I’m just playing with ideas, trying to get to know Jazzi and her cousin, Jerod, a little better.  Hope you like it.  http://www.judithpostswritingmusings.com/

I posted a short mystery story on my webpage.  The characters have been bugging me.  So has the idea.  So I wrote it.  Hope you enjoy it.

When I started writing the Babet/Prosper novellas, it was because my daughter, Holly, kept bugging me to write more mysteries. I didn’t want to write a novel, but I did get excited about writing short stories. I’ve sold mystery short stories, and I enjoy writing them. That’s how ONE LESS WARLOCK (free on Kindle, Nook, smashwords) came about. It was an experiment to see if I could combine paranormal and mystery elements into a locked room mystery–you know the type, where they find a body in a sealed room. So how did the killer enter or leave? With paranormal, I had more gimmicks to work with. Totally fun. ONE LESS WARLOCK is short, because I intended on making it a one-shot deal–my effort to write a locked-room that would rival Agatha Christie. (Like that’s possible). But then, I really enjoyed Babet and Prosper. I got hooked on River City, and I thought, Why not write other types of mysteries and see how they work with witches and shifters?

I listed some of the types of mysteries that I enjoy. Of course, “puzzles” were at the top of my list. (I am a huge Agatha Christie fan). Try as I might, though, I can never make mine as clever as hers. MAGRAT’S DAGGER started out as a puzzle mystery–with the carved box that the “bad” witch dug up from the witch’s grave and the mummified hand holding the dagger inside it–as a clue. I was happy with the mystery when I finished it, but I fell short of Agatha. So who knows? Someday, I might try a puzzle again. I was happier with my “face in a crowd” mystery–of a person who’s supposedly been dead for years–when I wrote A DIFFERENT UNDEAD. Again, when you can mix paranormal and necromancers in the mix, anything’s possible. BAD JUJU was my stab at a missing person mystery. Who took her? Why? But then the paranormal elements started swallowing the mystery elements, and my whole process got a little murky. Which means there are still lots of types of mysteries that call to me. CELT SECRETS was my stab at the villain who kidnaps the hero’s girlfriend to use as leverage. I liked that, but I still want to write a Ten Little Indians plot, (by Christie)–where people are stranded somewhere and one person dies at a time–like the game and movie CLUE. And there are still the switched identity gimmicks, a suspense/thriller type story with a ticking clock, and maybe even a spy/betrayal type.

I’ve tried to write a mystery that hinges on handwriting analysis, and the idea still fascinates me. The entire process intrigues me. Which way does your writing slant? What does that say about you? What are your loops like in your letters–open or closed? http://www.viewzone.com/handwriting.html My friend wrote a story that pivots on handwriting, and I’m jealous, but it’s still on my “to do” list.

I can add another. I want to write a story from the POV of an unreliable character–but those are tricky. I could go on and on, but I hope you have the same problem I do–more ideas for stories than time to write them. Still, it’s fun having a “list” of things to do. Life never gets boring. So I hope you’re brimming with ideas, too, and happy writing!

BTW: Michael finished the cover for my 2nd Empty Altars book: Spinners of Misfortune. I love it! Hopefully, the book will be online soon. I think the cover hints at the Norse myths in the story line. 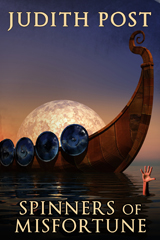 My patrician friends read weighty, literary tomes.  Or edgy, witty novels.  Or sophisticated skewers of society.  Years, maybe centuries ago, a friend and I went to a writers’ conference at a university.  We signed up for different panels and classes, but both of us had the same experience.  The guest writer started his lecture, asked the participants what they were working on, and informed each of us that writing for a genre was equivalent to writing trash.  Three years later, we returned to the same university for a conference, and genres had come up in the world.  One of the guest speakers wrote and sold lots of horror novels.  Another wrote mysteries.  A third wrote YA.  The publishing world had changed.  Really good writers, with masterful language skills, chose to write genre fiction.

Still, to this day, when I banter books with someone and that person is an afficiondo of literary novels while I’m discussing the latest urban fantasy, I feel outclassed.  I feel like the plebeian of the reading and writing world.   Literary might have fewer sales, but it has more clout.  It’s sort of like being a Woody Allen fan.  I love his movies, but I know better than to admit it to most of my friends.  They just shake their heads.  Even though I think anyone and everyone would fall in love with his latest, Midnight in Paris.

Anyway, the thing is, I read lots of classics in high school and college.  I still read the odd literary now and then.  But the truth is, I’m a genre junkie.  I asked for and read two anthologies of short stories by Flannery O’Connor and Eudora Welty one Christmas, and I read every single story in each book.  I loved the word choices, the rich imagery, the luscious language that just rolled off the tongue.  But give me one of Ellen Datlow’s anthologies any day, and I’d whiz through it faster.  I like plot.  I like tension.  Character studies are fine and all, but I want something to happen in my stories.  Both southern writers are brilliant, but I like genre better.

The nice thing about genre is that when I pick it up, I know what I’m going to get.  If I’m in the mood to add up clues and wrestle with the question “why?”– I buy a mystery.  If I want a kick-ass heroine, I’ll spring for urban fantasy.  If I’m into world building, I’ll crack open a fantasy.  It’s not that these can’t be written with strong characters and wondrous phrases, those are the authors I keep buying.  But there’s a meeting of expectations when I buy genre.  And I like that.

So what about you?  What’s your favorite genre and why?